Capital Community College faces an estimated $1.8 million shortfall in its budget for the fiscal year that begins July 1 under a proposed state budget now being considered by the Connecticut General Assembly.

That was the estimate provided to state legislators, community leaders, faculty and students at a Town & Legislative breakfast held at the Legislative Office Building  on March 3rd and organized by the College’s Foundation and Advisory Council.

President Wilfredo Nieves led the legislative breakfast discussion in which College initiatives in reducing achievement gaps and community partnerships were shared along with concerns about the state budget and cuts to student financial aid programs. He welcomed legislators and city and town officials including Hartford Mayor Pedro Segarra, a CCC alumnus, and Steve Adler, a member of the West Hartford Town Council. 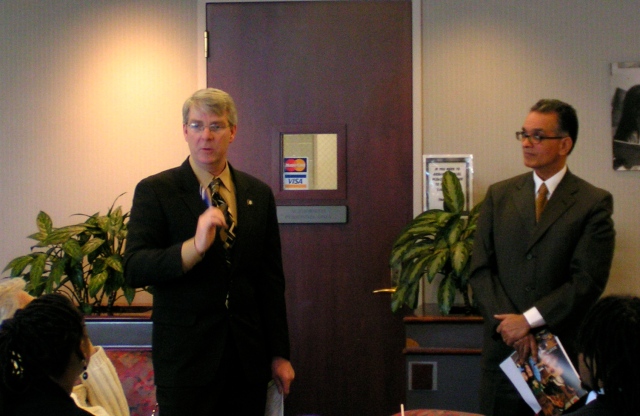 Dean of Administration Lester Primus based the shortfall on the Governor’s proposed appropriations for community colleges that would be 10 percent less than the amount of state funds in the current fiscal year.  State appropriations for Capital  total $11,268,370 which is about 48% of the overall budget. Other funds come from tuitions, fees, grants and contributions.  Primus said the shortfall will be severe whether or not labor concessions are made for the 2012 fiscal year. The cost of  collective bargaining increases at Capital in 2012  total about $394,393.

According to Primus, Capital has been paring costs at the college while serving more students over the last two years in response  to earlier cuts in state funding. Reductions have been made to advertising, printing and lowering utility and occupancy costs whenever possible.  The College is seeking to reduce its expenses for parking by up to $120,000 and is awaiting state approval to implement those savings in an agreement worked out with the Hartford Parking Authority.  Current expenses for parking total $700,000.

The college continues to look into all areas to reduce costs including academic programs, facilities, parking and administration.  Full-time tuition – now at $3,341 – will increase by more than two percent in the fall.

State funds are critical to maintaining programs of study that make Capital a major educator in the health care field. Cited was the associate degree in nursing program, the state’s largest.

The nursing program is more expensive than other programs because of the need for more full-time faculty positions and clinical activities.  “For every dollar that we take in we are spending more than $1.50” to maintain this nationally accredited program that currently enrolls 170 students pursuing RN licensure,  said Primus.

Dean Primus also asserted that institutional support expenditures “have been going down” at the college to deal with higher enrollments. “The money that we get is going back into the classroom. We’re not spending a lot on managers and supervisors.”   Primus put the ratio of managers to faculty and staff across the CCC system at one manager  to 29 staff members when all full- and part-time positions are considered. Capital is spending more than 60% of its resources on instruction, academic support and student support services.

President Nieves pointed to Capital’s designation as a “leader” college in the national student completion movement, Capital, one of 37 colleges in the nation selected, earned the “leader” recognition for “sustained improvements in student achievement” through a Black & Latino men’s mentoring program, interactive Learning Communities and tutoring and interventions in mathematics instruction that includes tutoring support. The College primarily relies on grant support outside of its operating budget to sustain these programs and to expand workforce training efforts.

At an  Appropriations Committee hearing for higher education held on February 28th, testimony came from dozens of faculty, students and officials about college cuts and financial aid programs. Cuts have been proposed for both state-funded scholarships and the federal Pell grant program in the coming year.  Eighty-six percent of students at Capital received some form of financial aid in the fall of 2010.

Capital student C.K. Wang of Newington testified he is “extremely concerned about the proposed budget and its effect on vital programs that have made it possible for me and my fellow students to succeed in college and the workplace.” Wang is an intern at Travelers and part of the College’s Crossroads to Careers program developed in partnership with the insurance company.  Also providing written testimony was Capital student Jarmaine Lee of Hartford. “When you add the cuts in your budget to the tuition increases set to go into effect and the cuts to federal Pell grants, it is a certainty that many Capital students will be denied the opportunity to continue their education. Fewer people will be able to go to college in Hartford next fall,” Lee testified. Both Wang and Lee spoke at the legislative breakfast.

Speaking on behalf of the CCC Foundation board were Chairman Tom Trumble and Stephanie Rubenzahl. Rubenzahl, the chair of the Foundation’ scholarship committee, spoke on literacy efforts in Hartford to prepare people for transitioning to the college. She is the assistant director of Literacy Volunteers of Greater Hartford.

The state budget will continue to be discussed and debated into the spring months.  The Governor and Legislature face a June 8th adjournment deadline to enact  a revenue and spending plan for the next two years.

A weblog for alumni and friends of the Capital Community College Foundation, Hartford, Connecticut active from 2009 to 2022, Comments and information pertaining to the College and College Foundation are welcome. John McNamara (Editor) Director of Institutional Advancement and Foundation Liaison Retired.
View all posts by @ Capital →
This entry was posted in Events, scholarships. Bookmark the permalink.