Commencement: Class of 2011 Is Largest Ever, First Music Degree Awarded

The 2011 commencement exercises were  a milestone for Capital Community College.  A total of 547  associate degrees and certificates  were conferred at the Connecticut Convention Center ceremonies on May 26th.  The number of graduates is an all-time high for the college which has experienced  30 percent enrollment rise since moving to the downtown campus in 2002.

The graduating class included a record 117 nursing majors who earned their associate degrees in preparation to become registered nurses.  The Class of 2011 is also noteworthy for the first graduate of the music industry program, a new and rapidly growing fine arts degree. The ceremonies featured music and singing led by Adjunct Music Professor and award-winning composer Josh Hummel  and students from the “Top Floor” ensemble.  “Josh has done an outstanding and magical job for us all year, and our students  have demonstrated themselves to be passionate and dedicated musicians,” said Associate Professor and Music Coordinator Art Hernandez. “Our music program will continue to grow thanks to our students, dedicated professors like Josh, and the great support of our College.”  During the 2010-2011 year practice rooms were added to the 11th floor’s  music and art classrooms and eight free Concerts @ Capital were held at Centinel Hill Hall auditorium. 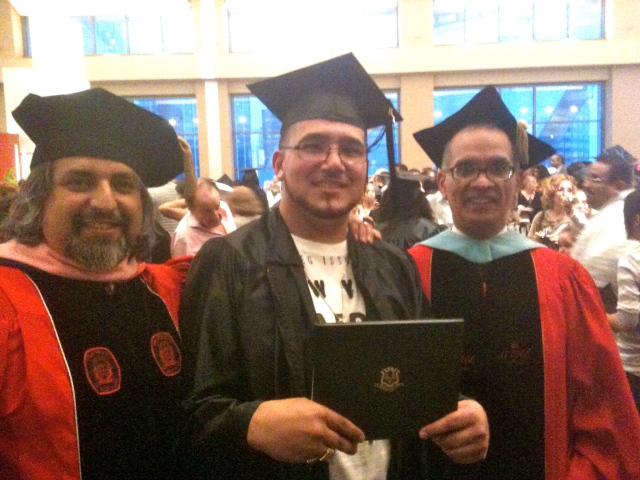 Christine Potter, a radiologic technology major, was the Class Valedictorian with high academic honors and spoke on behalf of her graduating class. Potter and Jennifer Shetlin were the Medallion recipients for the Class of 2011.

The Rev. Gary L. Miller, who retired as pastor of Hartford’s Asylum Hill Congregational Church on May 1, received the Board of Trustees Merit Award for his longtime service to

the community and support of the College. Rev. Miller has served on the board of directors for the Capital Community College Foundation and Advisory Council since 2009.   He opened the commencement ceremonies with an invocation.  He was joined on the platform by Tom Trumble, Chairman of the College’s Foundation.

John McNamara, the College’s Director of Institutional Advancement, was the recipient of the College Educational Excellence and Distinguished Service Award. McNamara has been the development officer for the College for the past 11 years.

Humanities Professor Peggy Schuyler delivered greetings on behalf of the faculty.  She cited the teaching careers and longtime service of Professors Evelyn Farbman (English) and John Rakoczy (Biology) and Academic Assistant Sharon Rakoczy  who will be retiring and joining the ranks of faculty and staff emeriti.

Adrienne W. Cochrane, J.D., President and CEO of the Urban League of Greater Hartford, keynoted the commencement.  Cochrane joined the ULGH in 2010, overseeing programs and initiatives in the areas of youth and education, workforce development and training. She formerly served as chief program officer for the Broward County, FL Urban League. Cochrane earned both Bachelor and Masters Degrees from Tuskegee University in Political Science and Counseling, respectively. She received a Juris Doctorate (Doctor of Law) from Saint Louis University School of Law, St. Louis, MO. While in law school, Cochrane interned in the University of Housing Legal Clinic where she worked to hold absentee and otherwise disinterested landlords accountable and provided legal counsel to low-income, inner city residents.

The Rev. Miriam Torres, pastor of Hartford’s House of Restoration Church, delivered the benediction. The Recessional was followed by a reception for graduates and their families at the Convention Center.

This was the 64th Commencement for Capital Community College which traces its roots to the late 1940s and the founding of the Connecticut Engineering Institute, the forerunner of Hartford State Technical College.  Capital and Hartford State Tech merged in 1992.

A weblog for alumni and friends of Capital Community College, Hartford, Connecticut. Comments and information pertaining to the College are welcome. For more information contact the Office of Institutional Advancement, CCC, 950 Main Street, Hartford, CT 06103. - John McNamara, Editor.
View all posts by @ Capital →
This entry was posted in Award, Commencement, music. Bookmark the permalink.