This September Capital Community College (CCC) will be marking two milestones –the 10th anniversary of the opening of its historic campus in downtown Hartford, and the 45th as a two-year, degree-granting institution. From its start in 1967 in converted factory space on Huyshope Avenue Capital and Hartford State Technical College, which merged with CCC in 1992, have been stepping stones to higher education and professional careers for generations of Greater Hartford residents.

It has been a decade of rapidly rising enrollments, new programs of study and collaborations that would not have been possible anywhere else but in the heart of the Capital City’s business and cultural district. 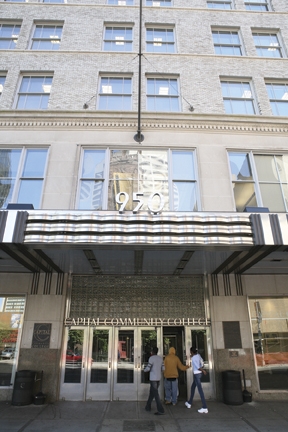 Today, Capital’s enrollment is 4,596, a 4.9% increase over spring 2011. The college is one of the most ethnically diverse institutions in New England and one of two colleges in the six-state region designated an Hispanic Serving Institution by the federal government.

In September 2002 the new campus opened at the former G. Fox Department Store after a $70 million top-to-bottom renovation of 300,000 square feet of space in the retail building, a downtown landmark where generations of residents shopped and worked. The college occupies the original section of the 1918 building. High tech classrooms, labs and faculty offices and a four-story skylight atrium on the top floors transformed the building into an award-winning educational facility. Care has been taken to preserve historic features including Centinel Hill Hall auditorium and the Main Street windows with vistas of downtown and beyond.

Downtown Hartford has become an extended campus for students with growing internship opportunities in businesses and institutions in the central business district. With a National Endowment for the Humanities grant, the College is incorporating the city’s rich cultural and historic heritage into the curriculum and experiential learning. CCC has joined forces in a Main Street collaborative with downtown partners such as Hartford Public Library, the Wadsworth Atheneum, Hartford Stage and the Old State House

For the community, 3,200 students have graduated in these past 10 years, moving on to the baccalaureate or taking their place in careers and professions as the result of studies in such programs as nursing and health professions, information technology, early childhood education, accounting and business management.

Propelling enrollment have been new programs such as music industry, communication media, criminal justice, insurance and financial services, computer support, emergency management and entrepreneurship. In 2011, 500 associate degrees and certificates were awarded – an all-time high that reflects an enrollment 30 percent higher since the College’s move to 950 Main Street in 2002.

CCC will be marking the 10th anniversary of the downtown campus with public events and activities throughout the 2012-2013 year. These include an interpretive exhibit of the G. Fox Department Store at the Conrad L. Mallett, Jr. Gallery in association with the Connecticut Historical Society, the Concerts @ Capital series at Centinel Hill Hall, an alumni day and lunchtime lectures. The College’s nonprofit Foundation will be holding its 8th Changing Lives Gala November 15th, the college’s signature charity event held on the campus each year to support scholarships and programs.

For information on the college and anniversary activities contact the Office of Institutional Advancement at 860-906-5102, e-mail jmcnamara@ccc.commnet.edu . More information on CCC and its programs is available at www.capitalcc.edu

A weblog for alumni and friends of Capital Community College, Hartford, Connecticut. Comments and information pertaining to the College are welcome. For more information contact the Office of Institutional Advancement, CCC, 950 Main Street, Hartford, CT 06103. - John McNamara, Editor.
View all posts by @ Capital →
This entry was posted in Uncategorized. Bookmark the permalink.