Donors, students, alumni and faculty joined members of the CCC Foundation on May 30th at the Foundation’s first Donor Recognition Tea held at Riverfront Recapture’s Community Boathouse in Riverside Park.

CCC President Wilfredo Nieves and Student Senate President Alicia Barrow welcomed and thanked 50 attendees during the program that recognized the support of individuals and corporate sponsors in recent years.

Daileann Hemmings, a  staff nurse on the Women’s Health Unit at Hartford Hospital and a 2004 graduate of the College’s nursing program,  led the program  by sharing her experiences as a student and graduate who went on to the University of Hartford to earn her bachelor’s and Master of Science in nursing. 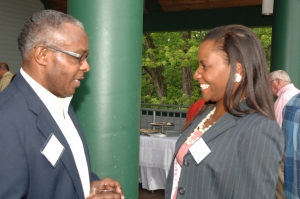 A Brooklyn, NY native, Daileann aspired to the nursing profession as far back as junior high. She learned about CCC at East Hartford High School where she earned early college credits. “For those who think attending a two-year institution means the education is lacking, I’ll have you know it is the complete opposite, ” said Hemmings. “There were no short cuts.” The goal “was to have a product of excellence” and “knowledgeable professors would settle for nothing less. This is the education students at Capital receive.”

In 2012 Hemmings is one of 20 Connecticut Health Foundation  Leadership Fellows. She is an advocate and volunteer on women’s health issues and for children and adults suffering from sickle cell disease, serving on the boards of  the Institute for Community Research and Citizens for Quality Sickle Cell Care.  Hemmings, who thanked contributors for helping provide scholarships, credits her CCC education for her and other graduates’ desire to give back to the community. 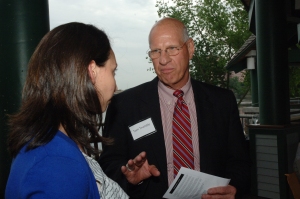 Professor Femi Bogle-Assegai of the Humanities Department shared her involvement with colleagues and students in an exploration of the city’s rich cultural and historic assets and immigrant communities to improve writing courses and to develop learning communities. The Hartford Heritage program is the result of a $98,645 National Endowment for the Humanities (NEH) grant and has led to new collaborations between the college and arts, history and cultural institutions and organizations.

President Nieves noted that through the generosity of more than 300 donors and 60 companies over the last five years the CCC Foundation has  created more access for students and has begun to provide the college with new funds for innovation. Over the last three years the Foundation has awarded more than $210,000 in scholarships to Capital students. New grants have supported tutoring, advising and programs that are contributing to academic success. 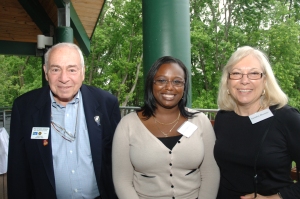 Atty. Richard Seidman of the Rotary Club of Hartford and Rotary Foundation, Capital Student Senate President Elicia Barrow and Sandy Blumer of Hartford Rotary’s Board of Directors. The Rotary Club is creating a new scholarship endowment at the college.

Capital’s campus opened 10 years ago in downtown Hartford and Nieves said a major benefit of the location has been higher enrollments and new partnerships.

Sponsorships have been complemented with new support from individuals and groups with awards in honor or memory of others over the last year. They include the George J. and Anna T. Repicky scholarships and the Adam E. Staszko Memorial scholarships in nursing.  A second Deborah L. Katz Memorial one-year scholarship will be awarded in the fall.  A CCC Alumni Association scholarship created by the Hartford Public Schools Support Supervisors Association will be awarded for the first time.

In thanking donors and sponsors,  President Nieves announced that the Rotary Club of Hartford,  the 21st oldest  chapter  of Rotary International, is creating a $25,000 scholarship endowment at  Capital in 2012-2013.

Attending the recognition event with Nieves from the Foundation were Michael Brett, Stephanie Schenkel, John Shemo and Herb Silver and Andrea Mesquita-White.  Foundation Chair Emeritus Tom Trumble and Director Emerita Brad Noel also participated.  Trumble, a three-term member of the CCCF, received the College’s Merit Award at the May 24th Commencement for leadership in “organizing Changing Lives Galas, strengthening board involvement in the college and increasing support for scholarships and student success programs.”

A weblog for alumni and friends of Capital Community College, Hartford, Connecticut. Comments and information pertaining to the College are welcome. For more information contact the Office of Institutional Advancement, CCC, 950 Main Street, Hartford, CT 06103. - John McNamara, Editor.
View all posts by @ Capital →
This entry was posted in Alumni, Crossroads To Careers, Events, scholarships. Bookmark the permalink.