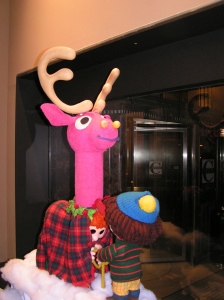 A reindeer that was part of G. Fox & Company’s famed Christmas displays at the Mallett Gallery

The exhibit, made possible by a grant from the Beatrice Fox Auerbach Foundation Fund at the Hartford Foundation for Public Giving and contributions from individuals,  the Connecticut Historical Society and Hartford Public Library, intersperses store artifacts and historic photos with artists’ interpretive works about G. Fox & Company on Main Street  where the College relocated in 2002 in a top-to-bottom modernization of the 11-story building that was built in 1918.

The G. Fox & Company exhibit, organized by Gallery Curator and Associate Professor Pedro Valentin,  opened in late September as part of Envisionfest, a project of the The iQuilt Plan and to celebrate the 10th anniversary of the college campus downtown.

In addition to the exhibit the College’s Hartford Heritage program,  funded by the National Endowment for the Humanities (NEH),  established  a Learning Community course in the fall semester about the history of G. Fox & Company as part of place-based learning being introduced into the curriculum. The College will also establish a permanent, revolving display of the building’s history and prominent role in community life.

New items have been added to the exhibit this month in recognition of the department store’s  legendary holiday decorations that included a Christmas village with historic Connecticut buildings on its marquee and festive paintings and displays in its Main Street windows where the College’s Mallett Gallery is now located.  At the December 20th reception visitors enjoyed menu items from the store’s Connecticut Room, including date nut bread muffins and egg salad tea sandwiches. 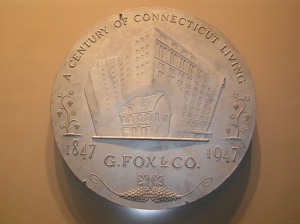 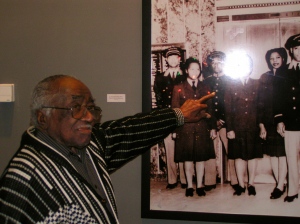 Kenneth Wright, a G. Fox & Company elevator operator, points to his own photo with co-workers. Wright retired in 1980. 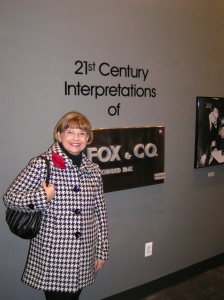 Donna Wallach, a bridal consultant at G. Fox in the 1970s, was one of the visitors and former employees at the exhibit.

Some of the original G. Fox merchandise on display at the Mallett Gallery. 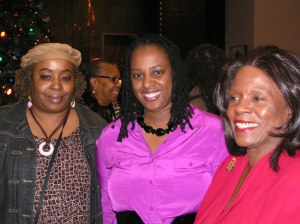 From left Capital IT department’s Marcia Clark, Alumna Jackie Phillips and Dean of Students Doris Arrington at the Mallett Gallery.

A weblog for alumni and friends of the Capital Community College Foundation, Hartford, Connecticut. Comments and information pertaining to the College and College Foundation are welcome. For more information contact the Office of Institutional Advancement, CCC, 950 Main Street, Hartford, CT 06103. - John McNamara, Editor.
View all posts by @ Capital →
This entry was posted in Art, Events, G. Fox. Bookmark the permalink.