More than 100 colleagues, friends and former students attended the gathering for Caddigan who retired from the College five years ago.  Caddigan continues her work  as an Intercultural Liaison at the Hartford Public Library as part of its immigrant civic engagement program. 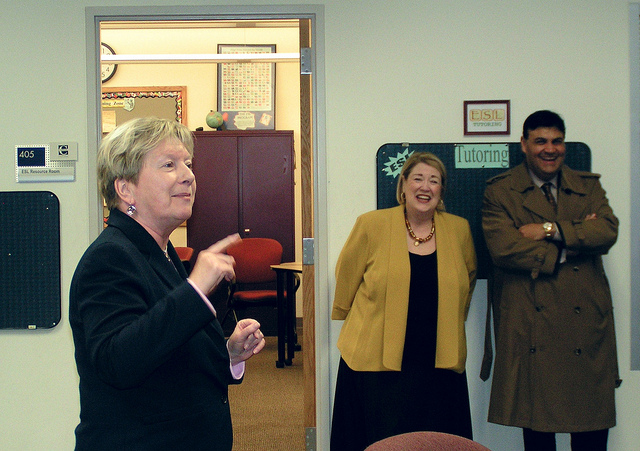 Faculty and staff members led by Business Professor Mary Jean Thornton, Program Coordinator Jennifer Kriksciun and Faculty Secretary Amy Lemire led a drive to honor Caddigan with a Window To The Future. During the Spring semester donations to the College Foundation’s endowment fund paved the way for permanent recognition of Caddigan at one of the fourth floor Main Street windows near the ESL laboratory.

Caddigan was credited for her dedication to helping students overcome language barriers on the path to college degrees and careers. Colleagues and friends praised her as a guiding force in the creation of the College’s ESL Lab where today more  than 200 students of different nationalities speaking more than 30 languages enroll each semester. 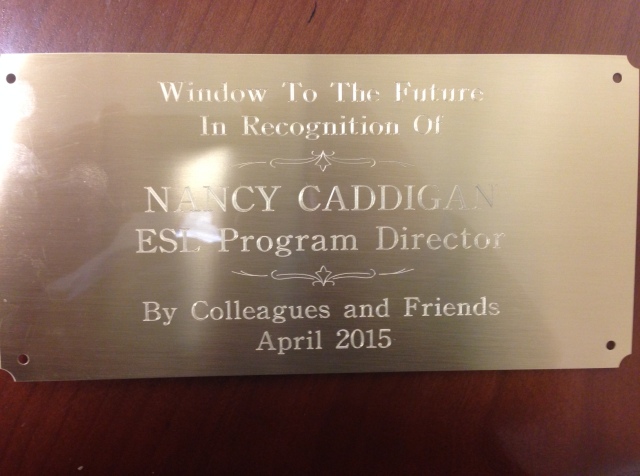 A Window To The Future plaque permanently recognizes the ESL work of Nancy Caddigan. It will be mounted next to a fourth floor Main Street window where the ESL lab is located. (McPhoto)

The mission of Capital’s English-as-a-Second Language Program, developed by Caddigan and her colleagues in the 1990s,  is to enable non-native English-speaking students to develop and synthesize the core English language proficiency skills necessary for success in diploma and certificate programs at the College.

“Windows” endowment gifts began when the college moved to its downtown campus in 2002. The renovation of the former G. Fox building into the new home of Capital included the restoration of more than 90 windows with views of Main Street and downtown.

A weblog for alumni and friends of Capital Community College, Hartford, Connecticut. Comments and information pertaining to the College are welcome. For more information contact the Office of Institutional Advancement, CCC, 950 Main Street, Hartford, CT 06103. - John McNamara, Editor.
View all posts by @ Capital →
This entry was posted in Capital Community College, English As A Second Language (ESL), Events and tagged community college. Bookmark the permalink.