Alumnus Philip Knecht (A.S.’12, Honorary ’07), a longtime booster and friend of Capital Community College, passed away on February 3rd with his family at his side. He was 87.

Knecht, a real estate appraiser and property manager in his working years, has been a familiar face at Capital for three decades. He started as an instructor in the Continuing Education division where he taught Real Estate Principles and Practices.

When he was 65 Phil, a native of Brooklyn, New York, enrolled in one class.  Others — one at a time — followed over 20 years. Eventually those courses added up to his 2012 graduation with an associate in science degree five years after the College conferred an honorary degree for Knecht’s decades of volunteer service to the college.

The graduation of the oldest person to earn a degree from Capital prompted Phil’s grandson, Joseph Maltese, to publish a heartfelt tribute to his grandfather:

Upon his slow, cane-aided walk across the stage to earn his scroll, the crowd stood to their feet, cheering as the oldest college student in Capital’s history graduates. We were all inspired by the moment, each of us 1,500 people. Everyone knows Phil, and Phil knows everyone and then some. At 83 years old, he is the busiest man you will ever meet, balancing his life of family, friends, real estate, journalism, teaching, attending classes, and his countless volunteering for local and national political campaigns, as well as at food shelters and religious organizations. Despite recently being without a car, his social life has not been affected at all. If I can be half as involved or passionate about my actions when I am his age, I will consider myself the luckiest man alive.

In addition to his career in real estate appraisal and property management, Knecht’s pursuits have involved Democratic politics dating back to John F. Kennedy. His reputation for getting voters to the polls and working on campaigns was well-known in his town of Wethersfield, in Hartford and throughout the state. 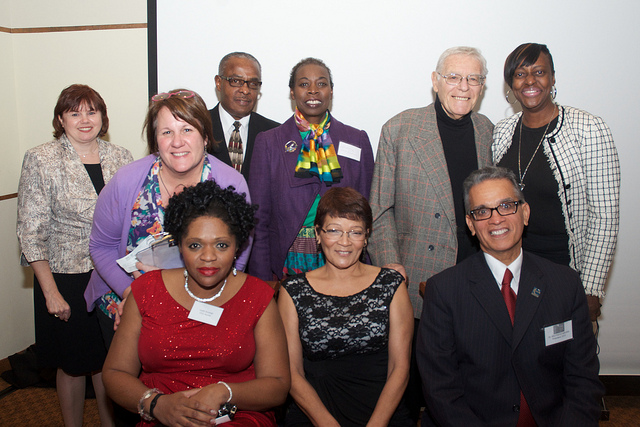 Phil Knecht (standing second from right) at a Changing Lives Gala with alumni and President Nieves.

But education and access to Capital Community College were Phil Knecht’s real passions be it as a teacher, student or mentor. Knecht served on the student senate and was a lifetime member the Phi Theta Kappa (PTK) Honor Society through his continuous involvement on campus.  More than anything else Phil wanted to make it possible for others to attend his alma mater. When his birthdays rolled around every November Knecht would ask friends instead of a personal gift to make a scholarship donation. In January, friends from Capital took the ailing Knecht to lunch at Ginza Restaurant not far from his Silas Deane Highway residence. He brought with him a last contribution for scholarships at Capital.

“Phil’s passion for life touched many lives” noted his family in his obituary. “He leaves a legacy of political activism, commitment to education and a mission to reach out to all people and cultures, especially those in need.”

His family asks that in lieu of flowers, donations be made to the Capital Community College Foundation, Phil Knecht Memorial Scholarship Fund, 950 Main Street, Hartford CT 06103.

A gathering of family and friends will be held Sunday, February 28th from 1:00 – 2:00 at the Carmon Funeral Home Chapel, 807 Bloomfield Avenue, Windsor CT. A memorial service to celebrate Phil’s life will immediately follow at 2:00.

Phil Knecht at the 2015 Commencement Reception

A weblog for alumni and friends of the Capital Community College Foundation, Hartford, Connecticut active from 2009 to 2022, Comments and information pertaining to the College and College Foundation are welcome. John McNamara (Editor) Director of Institutional Advancement and Foundation Liaison Retired.
View all posts by @ Capital →
This entry was posted in Alumni, Announcements, In Memoriam, scholarships. Bookmark the permalink.