Classes for the fall semester begin on the same day. 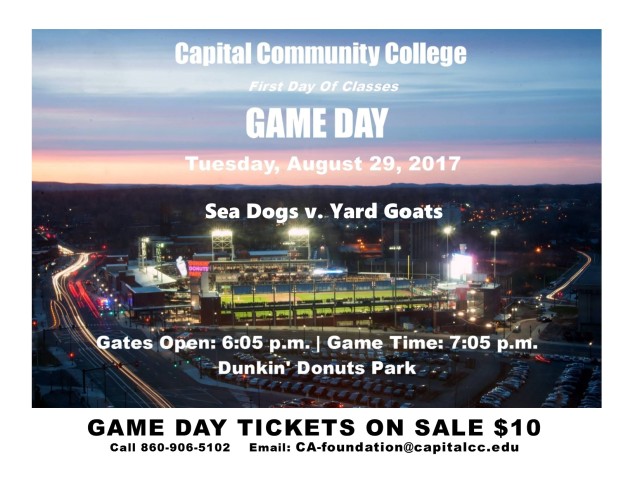 The fall semester marks the start of the College’s 50th anniversary year. In the fall of 1967 Greater Hartford Community College opened on Sequassen Street near what is now Coltsville National Park.  The College subsequently moved to the Woodland Street campus before relocating to the former G. Fox & Company Department Store in 2002. Hartford State Technical College,  founded in 1946 as the Connecticut Engineering Institute, was consolidated with Capital in 1990.

Capital Community College Game Day will be one of a series of events during  2017-2018 to mark the College’s anniversary year.

$10 tickets are available at the College’s Advancement Office or by calling 860-906-5102; e-mail: CA-Foundation@capitalcc.edu.    Interested persons may reserve or purchase tickets at the College Foundation’s Network For Good Link

The Hartford Yard Goats, an affiliate of the Colorado Rockies, are concluding their first season at the downtown stadium that is a short walk from Capital’s 950 Main Street campus.  In a Baseball Digest poll, Dunkin’ Donuts Park was rated  the best AA minor league park for 2017.

A weblog for alumni and friends of the Capital Community College Foundation, Hartford, Connecticut active from 2009 to 2022, Comments and information pertaining to the College and College Foundation are welcome. John McNamara (Editor) Director of Institutional Advancement and Foundation Liaison Retired.
View all posts by @ Capital →
This entry was posted in Announcements and tagged Baseball, capital community college, Hartford. Bookmark the permalink.