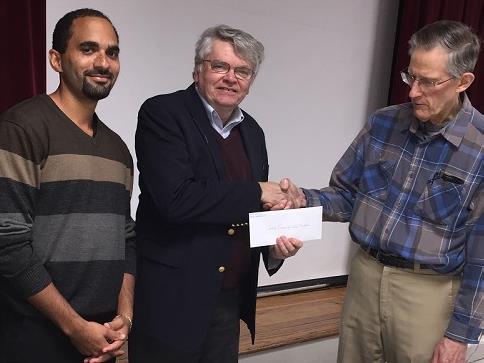 Professor Seth Freeman (left) and John McNamara of Capital Community College accept scholarship contribution from BPMUG President Steve Langford. BPMUG, established in 1982, will disband at the end of the year after 35 years of activity as a self-help computer user group.

The Business and Professional Microcomputer Users Group (BPMUG), a volunteer organization founded in 1982,  donated an annual scholarship for a 10th consecutive year at its October meeting. The $500 gift will benefit a Capital student majoring in computer information systems.

The October meeting held at the First Baptist Church in West Hartford marked the last regular meeting of the membership organization whose members voted to dissolve at the end of the year.

Through the years the focus of the group has been to help the public and each other with computer questions and usage. The October meeting featured a presentation on “The Future of Computing” by Professor Seth Freeman, coordinator of the Computer Information Systems (CIS) program. Freeman and other faculty from Capital have made presentations on information technology and computers in recent years. Professor  Freeman became a member of BPMUG’s Board of Directors and editor of its monthly newsletter, The Help Key. BPMUG members began scholarship giving to Capital’s Foundation in 2008 when the organization celebrated its 25th anniversary.

BPMUG, affiliated with the international Association of Personal Computer User Groups, was founded in 1982 as computers were being introduced in homes and workplaces. In its first year consumers were buying the new Commodore 64 computer with 64 kilobytes of memory, Apple Computers made its first billion dollars and the Wordperfect Corporation introduced Wordperfect 1.0.

“For 35 years BPMUG has been serving the needs of many people for information about their use of computers.  Unfortunately, as we all know, all good things must end sooner or later.  In the case of BPMUG, the time has come for us,” said President Steve Langford.

Langford explained the reasons for dwindling membership: “The population of people who have received the most benefit has mostly consisted of people who didn’t grow up with computers, along with a few that thankfully had some computer knowledge that they were willing to share.  Over the years the percentage of the population that didn’t grow up with computers has steadily diminished.”

John McNamara, the College’s Advancement Director and liaison to the Foundation, thanked BPMUG President Langford, the membership and Secretary Sonja Davis, who was instrumental in connecting the group to Capital and its CIS program.  “BPMUG has helped so many get acclimated to computer use and the internet through the years. They’ve accomplished their mission and we are grateful for their annual scholarship gifts.”

A weblog for alumni and friends of the Capital Community College Foundation, Hartford, Connecticut active from 2009 to 2022, Comments and information pertaining to the College and College Foundation are welcome. John McNamara (Editor) Director of Institutional Advancement and Foundation Liaison Retired.
View all posts by @ Capital →
This entry was posted in Business and Technology, scholarships and tagged capital community college, Computers, scholarships. Bookmark the permalink.