The lecture, open to the public,  is the third in CCC’s inaugural Hartford Studies Public Lecture Series. It will be held at Centinel Hill Hall auditorium at the 950 Main Street campus at 5:30 p.m.

Dr. Walsh, Associate Director of the Leonard E. Greenberg Center for the Study of Religion in Public Life at Trinity,  has written and published extensively on religion, public life and Hartford history. He is co-editor of of the Center’s book series, The Future of Religion in America, to be published by Columbia University Press.

The College’s Hartford Heritage Project and College Foundation are hosting the series on Hartford history as part of  Capital’s 50th anniversary commemoration.

Historian and author William Hosley is curating the series for Capital and its Heritage project.  Hosley was formerly director of the New Haven Museum and Hartford-based Connecticut Landmarks, where he cared for a chain of  house museums, including Hartford’s Butler-McCook and Isham-Terry houses. Prior to that, as a curator and exhibition developer at Wadsworth Atheneum, his Sam & Elizabeth: Legend and Legacy of Colt’s Empire (1996), helped spawn the Coltsville National Park. 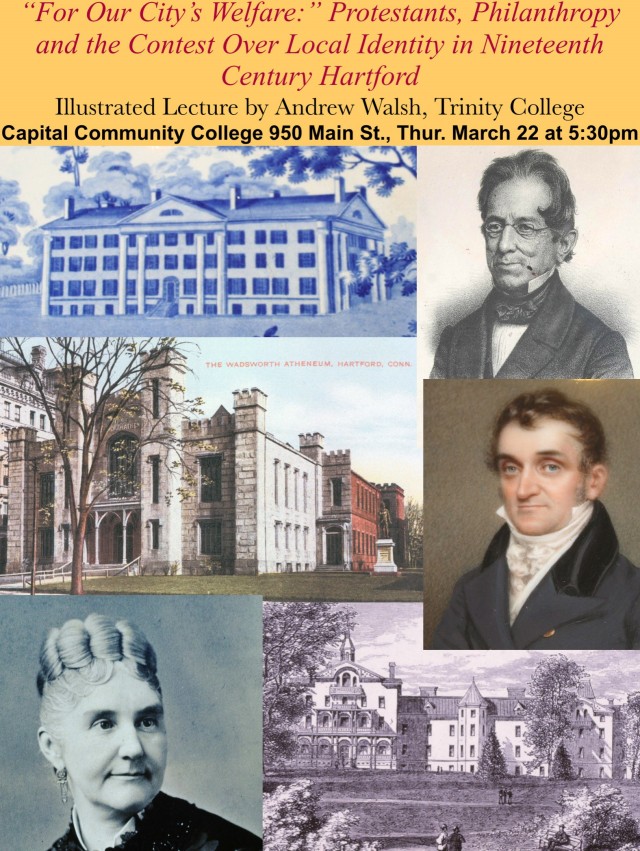 Contributions in support of the history series and placed-based learning are welcome through a contribution form, secure online giving or by phone: 860-906-5102. The lecture series is being supported by the College Foundation’s 21st Century Endowment Fund.

To learn more about the Hartford Heritage Project, visit www.capitalcc.edu/hhp