State lawmakers voiced support for debt-free community college and expansion of neighborhood-based training for manufacturing and other trades in Hartford  at a Town and Legislative Breakfast sponsored by the Capital Community College Foundation on January 30th.

Capital’s CEO G. Duncan Harris told legislators that the College, which offers more than 50 associate degree and certificate programs, is preparing students for “a first job, a better job and a career”  in response to the Governor’s  goal that 70 percent of adults in the state have a post-secondary education. He pointed to data showing a decline of low-skill jobs during the last recession with 13,000 “disconnected” youth now in North Central Connecticut in need of post-secondary training. Unemployment among 20-24 year olds in Hartford exceeds 20 percent compared to 11.7 percent for all of Hartford County. Dr. Harris stressed that without “credentials of value” residents will not be able to fill jobs in today’s economy.

Over the last year Capital has been addressing the challenge through development of an Equity Diversity and Inclusion Center that uses a “Single Stop” approach for holistic support around food resources, health insurance, legal and financial assistance including tax preparation.  School to career programs are now based at the LEAD Center (Leadership, Excellence, Achievement and Development) with apprenticeships and paid internship opportunities and  where workforce training is available for in demand occupations in health care,  manufacturing and construction.  The College, nationally ranked for educating older students (25 and over),  is ranked in the top five percent of two-year colleges nationwide in terms of upward mobility, according to an index from Harvard Opportunity Insights (2019) cited by Harris.

Dr. Harris, appointed to lead CCC in July, 2018, said Capital is interested in working with the city and partners in development of a “Trades at Capital” initiative that would establish a manufacturing and education training center in the city’s Upper Albany neighborhood.

Legislators and guests also discussed legislation adopted in 2019 that mandated a “last dollar” scholarship program for full-time community college students.  Funding for the program is expected to be addressed in the 2020 legislative session to implement the program known as Pledge To Advance Connecticut (PACT) .

State Rep. Matt Ritter, the House Majority Leader representing Hartford’s 1st District, praised the PACT scholarship program being advocated by the Co-Chairs of the Higher Education and Employment Advancement Committee, State Rep. Gregg Haddad and State Senator Will Haskell.  He said the debt-free college program leverages federal Pell grants and other sources, making it affordable for the state budget.  “We are committed to making it happen,” Ritter said.

Rep. Ritter also urged the college to pursue advanced manufacturing training in the Homestead and Albany avenue area of the North End to make that kind of job training accessible to residents. “One of the things we have to take from here is to how to do that with the college,” Ritter stated.

Joining Ritter at the breakfast in support of Capital’s programs and initiatives was State Rep. Brandon McGee, representing a portion of Hartford and Windsor and the Chair of the Black & Puerto Rican. McGee introduced State Reps. Jason Rojas, Joshua Hall and State Senator Doug McGrory from Hartford and East Hartford  and State Rep. Bobby Sanchez of New Britain, the House Chair of the Legislature’s Education Committee. 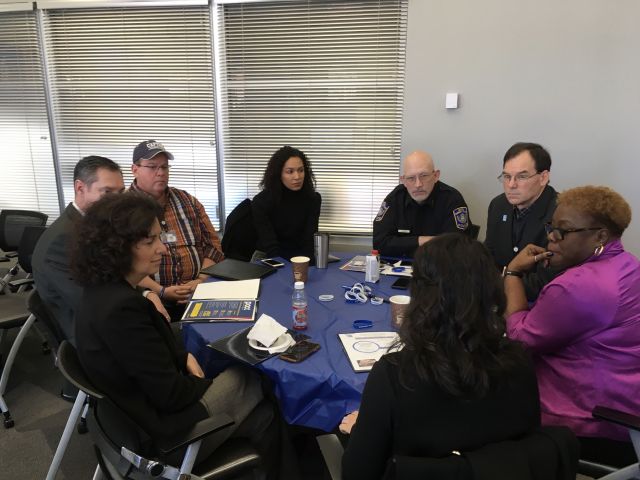 Discussion group including officials, Foundation directors and faculty at Town and Legislative Breakfast.

The College’s Foundation, a nonprofit organization established in 1985 to raise funds and manage endowments,  sponsors the Town & Legislative Breakfast each year.

For more information contact the Advancement and Foundation office: 860-906-5102′  CA-Foundation@capitalcc.edu