Connecticut educators, including Seth Freeman,  Professor  of Computer Information Science, attended the White House Symposium on Computer Science for All on October 28th.

The October 28th summit brought together educators and researchers from 17 states to trade best practices, learn about initiatives in other states, and to jump start specific programs to improve offerings of computer science throughout the United States.

The Symposium followed President Obama’s launch of  a new $4 billion national initiative, CS For All (Computer Science For All) last January. CS for All’s goal  is to improve offerings of computer science classes in K-12 schools across the country. Connecticut was one of 17 states represented at the conference, and one of three, along with Indiana and Texas, that received national funding in August to explore ways to improve computer science education. 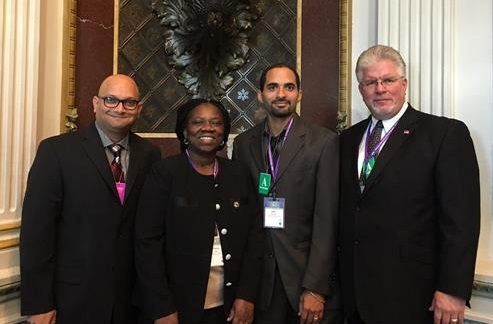 Freeman, a graduate of Clark University who earned an M.S. at Rensselaer Polytechnic Institute, was part of the CT delegation with Amit Savkar, Associate Professor in Residence at the University of Connecticut; Chinma Uche, Ph.D., Math and CS Teacher at Hartford’s Academy of Aerospace & Engineering, and: Gary S. Mala, Superintendent of the Avon Public Schools.

Freeman, who has organized summer computer camps for Hartford middle school students over the last three years with support from the Hartford Foundation for Public Giving, says the CS for All team in Connecticut  “is just beginning to develop a strategic plan for the state. Our initial focus is on getting commitments from school superintendents across the state to support this initiative. The primary role for higher education institutions will revolve around teacher pre-service and in-service training, but numerous other opportunities will exist to support the initiative.”

Congratulations to Seth for his efforts to expand and improve STEM education at the pre-college level and statewide.

A weblog for alumni and friends of Capital Community College, Hartford, Connecticut. Comments and information pertaining to the College are welcome. For more information contact the Office of Institutional Advancement, CCC, 950 Main Street, Hartford, CT 06103. - John McNamara, Editor.
View all posts by @ Capital →
This entry was posted in Science and Mathematics, White House and tagged Computer Science, Connecticut Colleges and Universities, STEM. Bookmark the permalink.